Hello from Crater Lake, where today it’s the 4th of July, America’s Independence Day. Crater Lake is in the state of Oregon and the only national park in the state. The crater is actually a caldera formed when Mount Mazama erupted about 7000 years ago. The eruption was so huge that once the magma escaped the volcano the mountain collapsed in on itself. Within the lake sits Wizard Island a volcanic cinder cone that actually has a crater at the top. Wizard Island was created by a number of smaller eruptions that happened after the Mount Mazama eruption.

During summer the park concessionaire runs a boat tour of the lake but only 2 of the trips each day include the stop at Wizard Island. Tickets only go on sale exactly 24 hours before and as the boat only takes 37 people you can guess what our first stop on arrival day was. Get some boat tickets.

So our first full day started with yet another early wake up call as we had to make the 1 hour drive round to the rim drive to hike down 1.1 miles in the boat dock. Being on a small boat on the lake was cool as you really got a look at how blue the water was and how high the crater walls were. After getting across to the island we had 3 hours to do whatever we wanted. The majority of people including ourselves decided to go for the summit trail. So up we walked to the top of Wizard Island. At the top you could clearly see the shape of the crater, you could even walk down into it if you wanted too. 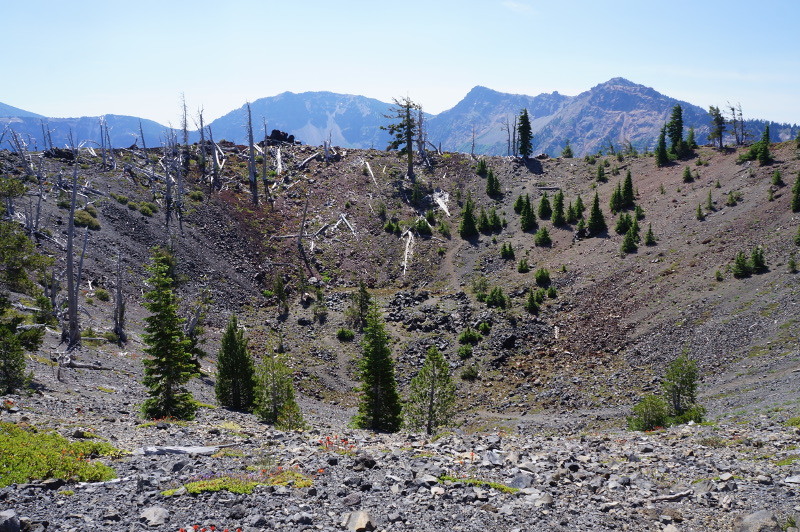 We didn’t think we had enough time to walk to Fumarole Bay so after making our way back went to the dock to chill. I’d taken my shoes off and was dangling my feet in the water which was nice and cool. I wasn’t planning to go swimming and hadn’t packed any swim gear. But after seeing the ranger who was onboard our boat tour jump in fully clothed, I was like… well if she’s just jumped in fully clothed so am I. Soon after there was quite a few of us jumping in fully clothed. Usually the surface water in summer is between 55 – 60 fahrenheit (12.7 – 15.5 celsius approx), but it didn’t feel that cold. No colder than the beach on a summers day.

The water is so clear and clean that on the way back we made a stop and the ranger offered to fill anyones water bottles up. She did have to say that obviously there is a risk of giardia but there hadn’t been any detected. Seeing she was filling up her own bottle most of the other passengers did as well. That and I think some of them were running low on water and there was the 1.1 uphill hike at the end.

Day 2 and 3 was time to get some hiking in. There’s a few hiking trails here but not to many. Most of them aren’t that long in the scheme of things either. The Pacific Crest Trail does run through the park though and hikers can take an alternate trail that takes them to the rim trail before rejoining up with the original PCT. We did both our hikes early in the day as there’s been a bit of a heatwave of late. That and it’s 4th of July weekend. You should’ve seen the amount of people coming into the park around lunchtime and trying to get a park! 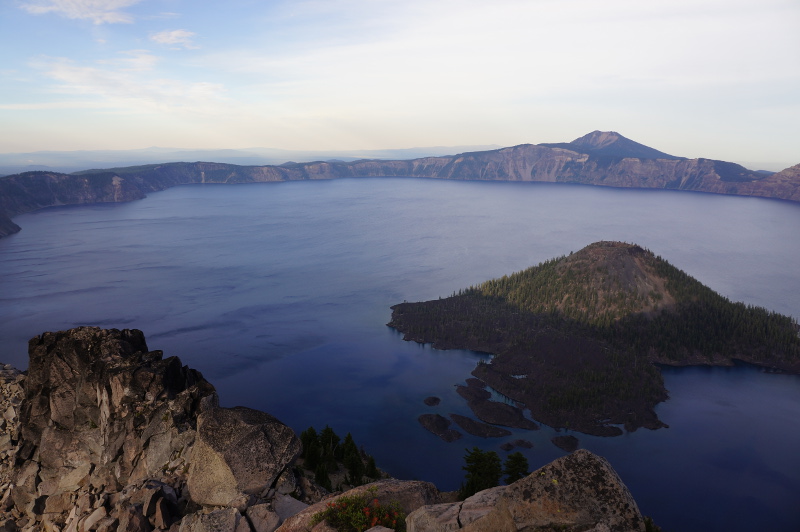 This evening we’re going to head to Klamath Falls fairground as apparently there is something happening there from 6PM for Independence Day. We have no idea what it’ll be like, a small country fair maybe?